Sr. Hanna Klaus, M.D. and Her Legacy of Building a Culture of Life

Describing Sr. Hanna Klaus, M.D. as a trailblazer is no overstatement. Today she is the oldest living member of the Catholic Medical Association, and her story, well-known within many circles of CMA, is the stuff of legends.

Sr. Hanna began her work as a Medical Mission Sister in the field of obstetrics and gynecology, and while in her role as assistant professor of obstetrics and gynecology at St. Louis University, she providentially read Drs. John and Evelyn Billings’ book, The Ovulation Method. She was sent by her department to Sydney to attend a congress on the Billings Ovulation Method in 1973. As a result, she became the resident expert on the Billings Ovulation Method in the Midwest, and along with some of her colleagues, founded The Aware Center that same year in St. Louis to promote and teach this fertility awareness-based method. Discovering this method of NFP and befriending the Billingses set in motion what has become her life’s work, educating an increasingly combatant culture about the beauty and wonder of human sexuality.

Sr. Hanna says she received a CMA lifetime membership when she joined the Medical Mission Sisters in 1960. As she served in medical missions as an OB-GYN in Pakistan (and what is now known as Bangladesh) from 1961-1968, Sr. Hanna said that her only connection to CMA was a copy of The Linacre Quarterly. In 1969, Sr. Hanna joined her community in St. Louis, Missouri, and was hired as an instructor for the department of obstetrics and gynecology at Barnes and Allied Hospitals (now Washington University School of Medicine). In 1970, the department head retired and was replaced by an “enthusiastic abortionist.”

“Abortion was not yet legal in Missouri, but there was much agitation for it,” recalled Sr. Hanna.

Sr. Hanna Klaus with her Teen STAR students at the Centro Tepeyac in Silver Spring, Maryland.

“The OB-GYN chief, Dr. Dennis Cavanagh, was deeply engaged in preventing the legalization of abortion and had me attend conferences. The CMA was an integral part of this effort. I was able to attend the annual meetings and found particular support from Drs. Herbert Ratner, Eugene Diamond, John Brennan, and Jack Mullooly, then editor of The Linacre Quarterly.”

Sr. Hanna was deeply impacted by the legalization of abortion in 1973, the same year she met Drs. John and Evelyn Billings. Her work in fertility education has continued to be fueled by a desire to make abortion an unthinkable choice.

“I’m always coming back to abortion because it’s absolutely taking life,” she said. “All the other injustices are at least theoretically correctible. If you’re alive some change is possible. If you get killed before you are born, that’s the end of that story.” 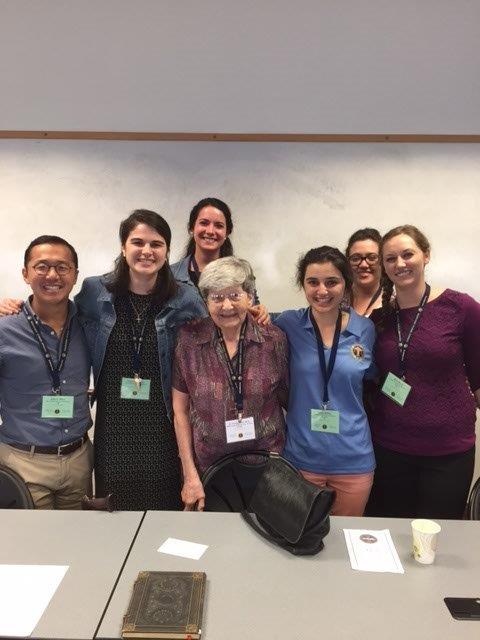 Sr. Hanna Klaus with medical students at the 2017 Medical Student and Resident Boot Camp in Philadelphia, Pennsylvania, where she served on the faculty.

Sr. Hanna conducted several user effectiveness studies for the Billings Ovulation Method and at the request of Dr. John Billings, she created Teen STAR, a program that teaches teenagers about sexuality in the context of adult responsibility. As a result of her efforts, Teen STAR has spread to approximately 35 countries in North and South America, Central America, Europe, Asia and Africa since its inception. Sr. Hanna has also authored many articles on the subject of Natural Family Planning and Teen STAR. In 1976, her article Positive Woman or Negative Man? received the Linacre Award. She also served on the Student and Resident Bootcamp faculty from 2015 to 2017 at St. Charles Borromeo seminary in Philadelphia.

“The Bootcamp is a program for medical students and residents. It’s on ethics and practical things. I had of course talked about Natural Family Planning and approaches to teens,” said Sr. Hanna. “When they moved from Philadelphia to Mundelein, I decided it was time for the younger generation to take it over. We’ve been working in tandem and there are many wonderful people.”

At the age of 94, Sr. Hanna stays abreast of the current topics that are of vital importance to the Catholic medical community. Referencing Dobbs v. Jackson Women’s Health Organization in which the Supreme Court overturned Roe v. Wade, Sr. Hanna admits she didn’t believe it’d be overturned in her life time, but believes a cultural change in attitude toward human sexuality is still what is needed to end abortion.

“My rationale was, and is, that the best way to prevent abortion is to prevent the crisis pregnancy, and NFP and Teen STAR are the means to exercise procreative choice. Two generations have grown up with the ‘contraceptive mentality.’ Reversing that is not going to be easy. Fertility is not a disease but today girls and women, and sadly most health care providers, treat it as one,” Sr. Hanna explained. “I know that the culture has tried to separate intercourse from its natural outcome, but the body has its own truth and people have to exercise choice before sex, not afterwards. I think [the reversal of Roe] will help people grow up.”

She is glad that CMA continues its work to provide a much-needed ethical voice in the midst of so much confusion about the dignity of human life, from conception to its natural end and everything in between.

“People need to know their faith and to practice it, and I think the CMA is trying to do that through the annual meetings and their prayer groups and all sorts of things,” she said. “There are plenty of wonderful people who are practicing Hippocratic medicine in spite of what the government is constantly trying to do. I think it’s very helpful that the CMA takes positions — we need to hold on to them.”